Big, big result. Rodney came today with the rebuilt distributor. He fitted it to the car, set the ignition timing and then connected a battery to the starter motor- and hey presto –

No nasty noises, no bangs or rattles, it sounded fine and tight and smooth. Fantastic.

Rodney and his twin brother

It was turning on the starter motor, no petrol involved, but Rodney is coming again next week, and we will try to get the engine firing properly.

And then you have to take it apart again! 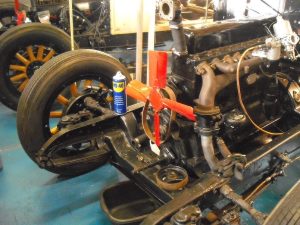 We drained the petrol tank and fitted a proper drain plug, instead of the temporary one I fitted last week.

Most of the small water leaks that appeared when water was added have since stopped, apart from a persistent drip at the bottom of the radiator. Also the core plug in the front of the engine block is rusty and needs replacing, and the fan didn’t go round when the engine was running – so we drained the water and removed the radiator. It will now go away for pressure testing.

The problem with the fan was easily fixed. The nut was loose on the driving pulley.

The control levers on the steering wheel operate a tick-over on the carb, advance and retard on the distributor, and a lighting & horn button. They work on 3 thin tubes turning inside the column, and they will not turn.

Control tubes in the vice

Having now removed the tubes from the column we found that the tubes are badly rusted at the bottom end, and show signs of a previous repair.

We will discard these controls for the time being and fit different lighting switches on the dashboard. The new SU carb does not have a tick over, and we will rig up a rod through the dashboard.for the advance and retard. 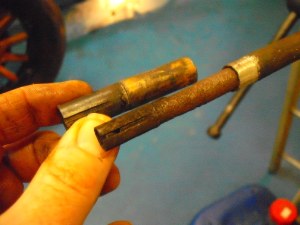 and Dave and Phil have made a great job of fitting the exhaust system.