Where did January go?

We fetched the generator back from Pete Sparks in Lincoln. It was the solid state regulator that was at fault. Rodney has now fitted a better larger regulator under the dashboard and everything is tickety boo! or electrickety boo?

While the generator was away, we fixed some of the other jobs. 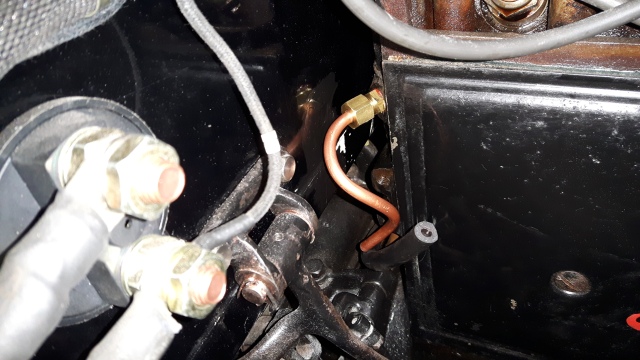 Ken suggested we should practice replacing a wheel rim, in the workshop, to find out how it was done, and how difficult it was going to be at the side of the road. These wooden wheels are unusual in that the outer rim and tyre comes off, leaving the wheel on the car – 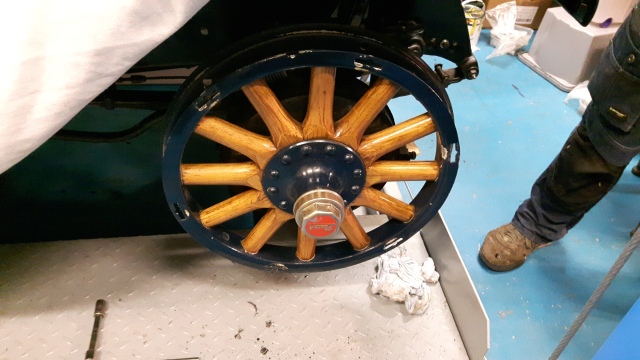 Dave undid the rim bolts and wedges, and the rim came off. It was a bit tight, probably due to the paint layers. It was difficult to get back on, but we managed it eventually. So we could change a wheel if we had to after a puncture, but it would be better if we didn’t have to. We are going to carry a can of tyre foam just in case.

Yesterday we started the engine, first time since December, and ended up flooding the floor through the overflow pipe on the radiator. It wasn’t just overflowing, it was pumping the water out. Ooops!

The engine was running nicely, but the temperature gauge went past ‘danger’, and stayed there. We tried again today, loosening various hoses to see where the water was flowing, and it wasn’t, until the thermostat opened and the radiator overflowed again big time.

We reluctantly removed the thermostat; refilled the radiator, and started the engine again……and everything went fine this time. Water flowed, temperature stayed cool and no floods.

So we concluded that the modern thermostat I purchased is too small for the Buick, and does not allow free movement of the coolant. So we will run without a thermostat for the time being. 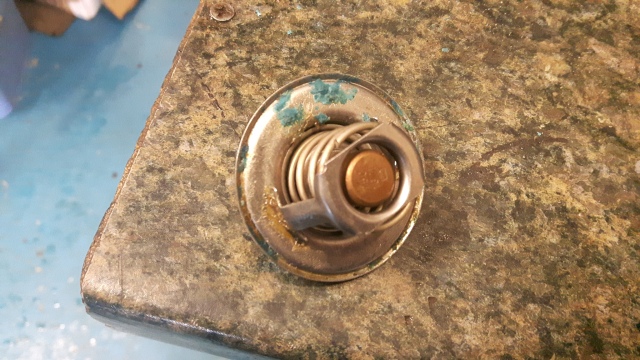 We learn something new every day.

Martin & little Phil took the Buick out today for a shakedown, the first ride since December.

Phil had already gone from back to front tightening loose nuts. The drive went great with no major problems, apart from a small oil leak on the oil pressure pipe, left side of the engine this time. We are really pleased with the Buick. 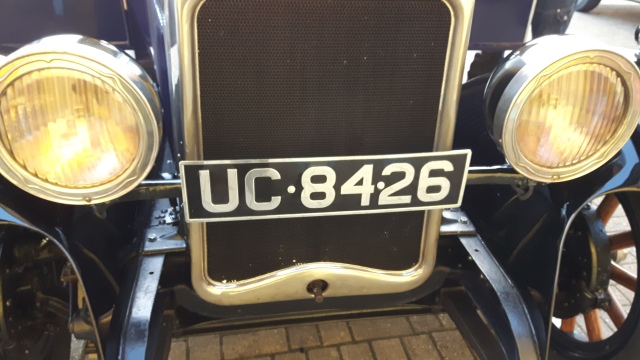 Phil also made a great job of polishing the steering wheel. 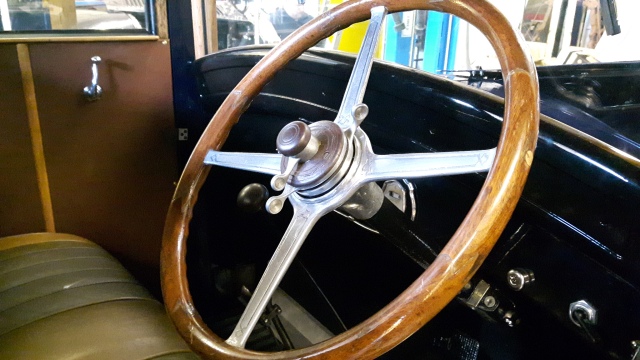 And more test driving when the weather allows.

Dave fixed the leaking oil pipe, and we had another test drive. It seems a bit underpowered, so we will ask Rodney to have a look at the timing and carbureation.

Not sure about the steering either. It seems a bit stiff after we adjusted it up. But we have not done many miles yet, and we are not sure how loose or stiff the steering should be.

Another test drive today, with Dave & Martin adjusting the brakes and the steering on the roadside. And a photo opportunity outside Dunstall Hall near Burton. 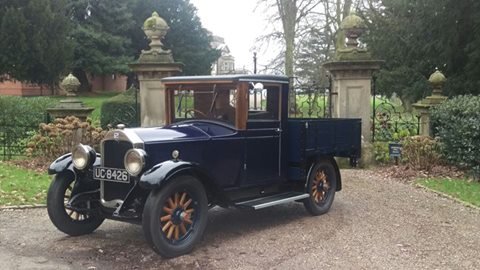 Rodney came yesterday and re-fitted the original richer needle in the carb, and advanced the timing slightly. Martin and Rodney went for a drive and reported it much improved with the power and torque returned. 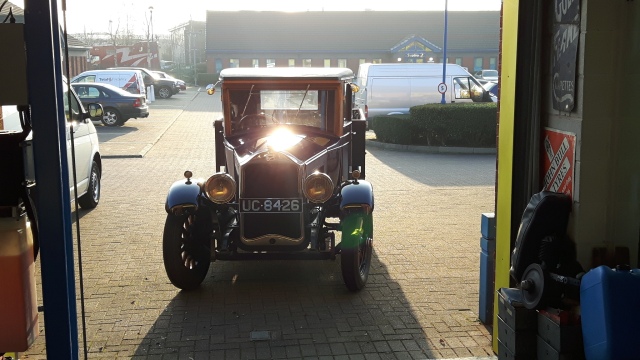 Today Dave jacked the back end up and removed the wheel to investigate the oil leak from the back hub. 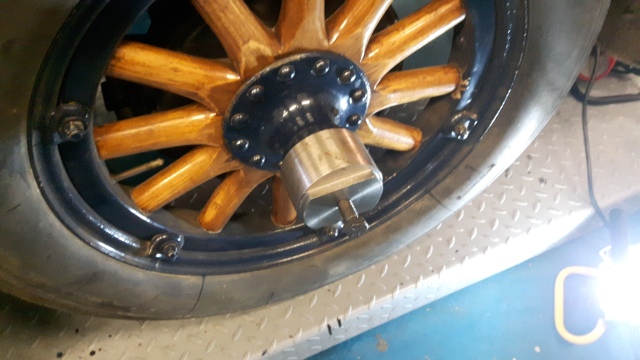 The oil leak was worse than ever today with oil coming out of the hub cap for the first time, but not in the brakes, luckily. 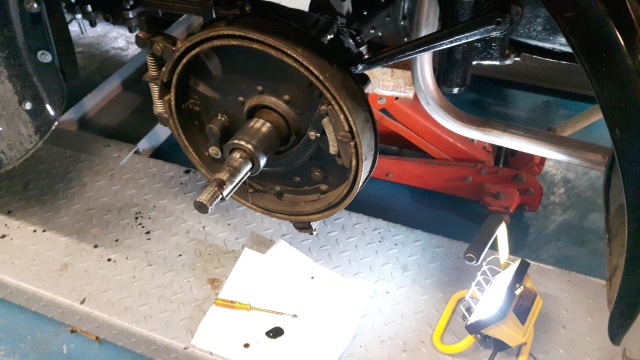 The oil was running down the half shaft and through the axle casing  into the hub. There is no seal shown in the parts list. The felt seal in the hub looked a bit loose, so we are having a new one made. 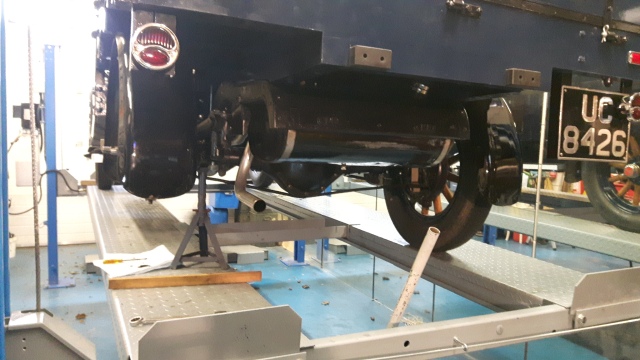 I put an appeal on the 1927 Buick Forum, and within 2 hours we had the answer. Thanks Fred & David. We had fitted the differential cover upside down, with the filler 2″ higher than it should be, and overfilled the diff housing with oil. Simples.

Dave fitted the new felt seal and re-fitted the wheel. 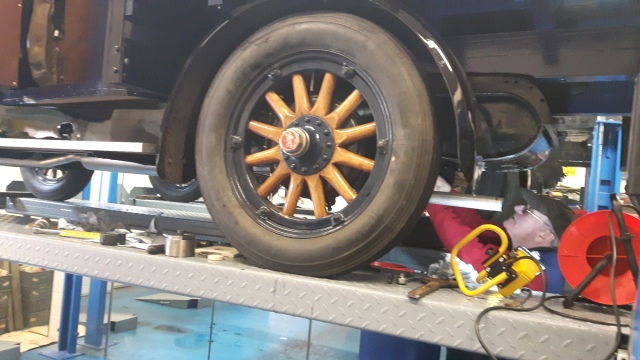 Then he drained the oil and took the cover off the diff. Dave & Martin turned it round, made a new gasket, put the cover back on, and refilled with 3.1/2 litres of new SAE140 gear oil. 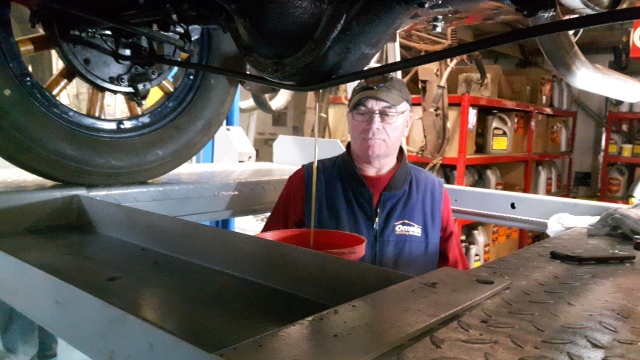 Good job well done, and ready for another test drive.

We got the speedo and the new cable. Martin fitted it, and it don’t work very well, or we didn’t go past 25 mph? 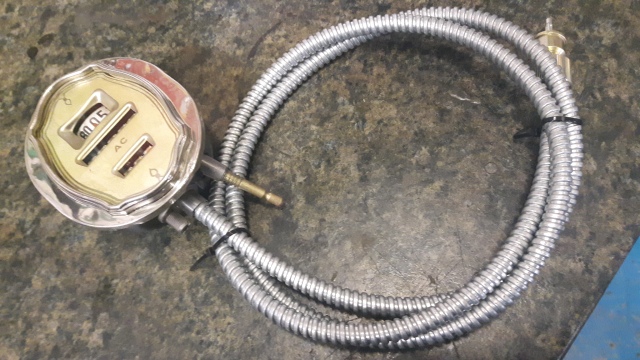 The steering felt a bit loose. The nut at the top of the column had come undone, and we had to break the bracket to get at it to tighten it up. 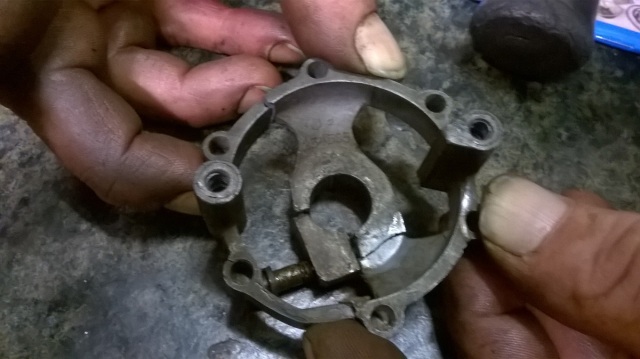 Martin glued it back together, again, and I might have found a better one in New Zealand.

Signs of the times.

We are going to use the Buick for advertising our 3 companies, and we had some signs made. 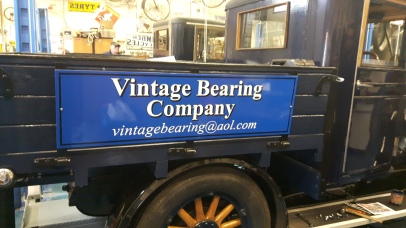 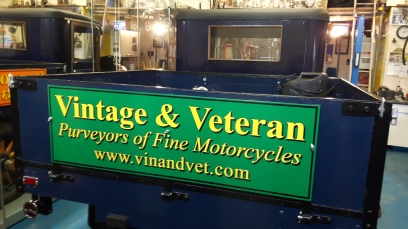 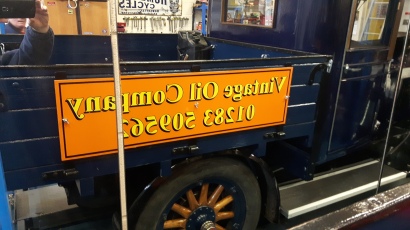 Martin took his father out for a ride as a birthday treat. A bit wet and windy courtesy of storm Doris.

The clutch was still not brilliant, so Ken studied the workshop manual and Martin adjusted the pedal stops, and we think it is better now. 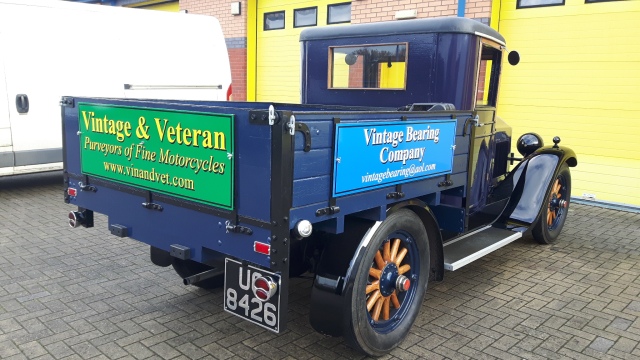 We put a motorcycle on the back for the first time, ready for a visit to Claymills Pumping Station on Sunday. http://www.claymills.org.uk

It looks like the rear springs have settled a bit, as the tyres are now close to the rear wings. We will have to look at resetting the springs or lifting the body somehow. 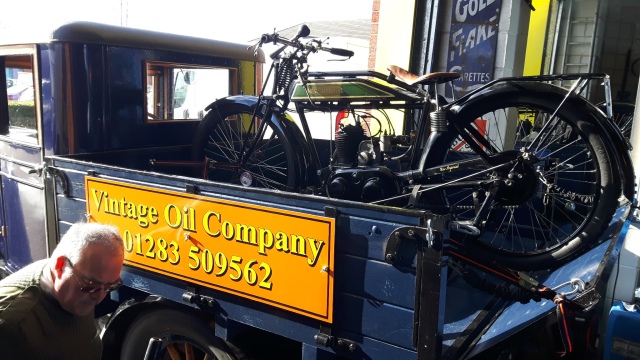 We have never had the covers for the holes in the side aprons where the grease nipples are hiding. 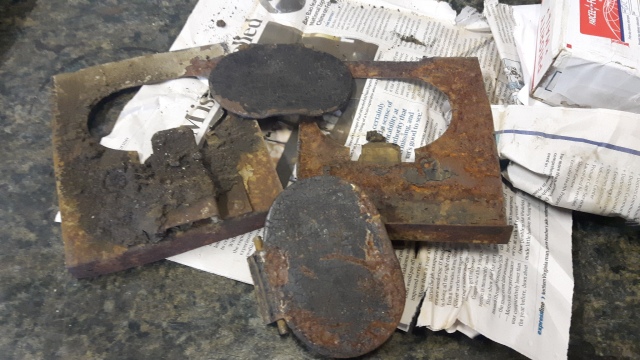 David in the USA found 2 for us, Little Phil cleaned them up and painted them, and they were fitted today. The last missing parts? 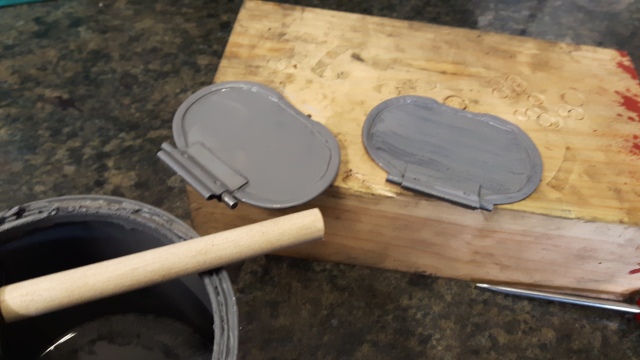 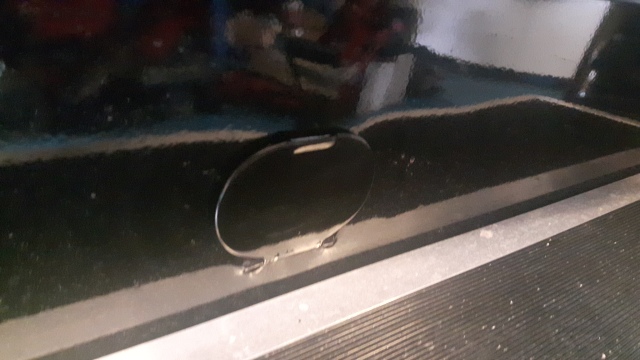 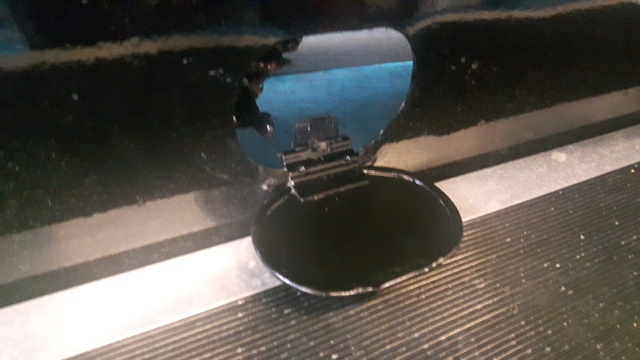 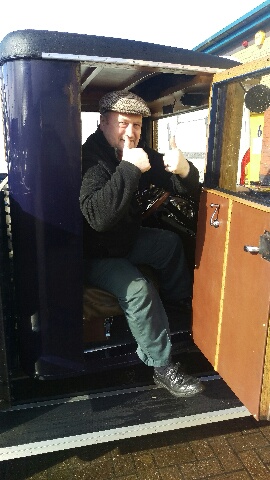 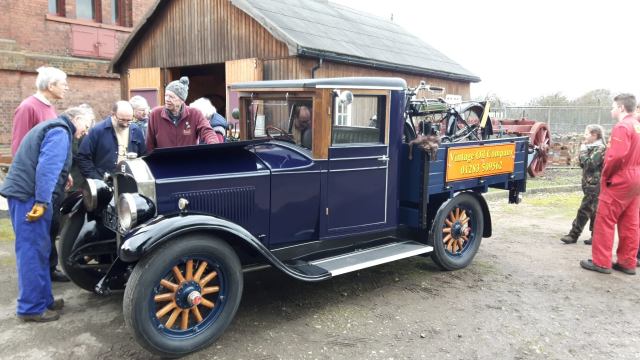