Buick is on the road, and we are test diving, adjusting, improving, and testing again.

It has not been on the road since 1955, so we are trying to break it. ie. find and fix as many faults as we can, on short trips close to home. We broke it today!

We adjusted the steering box today, to take out the excess play at the steering wheel, and first stop on the test drive for Dave & Ken, was the petrol station, as we thought we had run out of fuel on the road test yesterday. 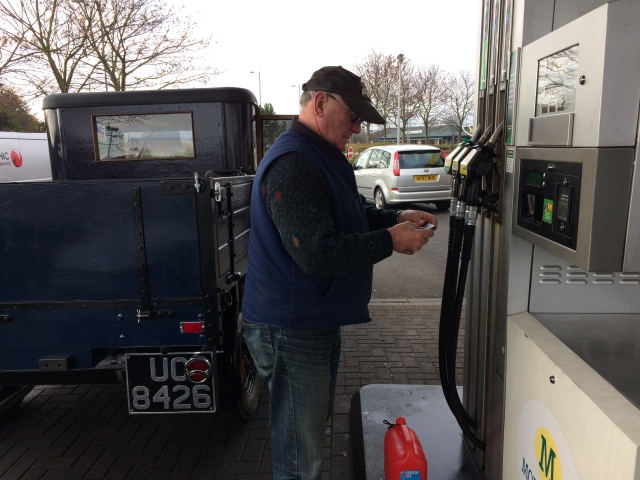 But there was a problem in that it only took 19 litres before the tank was full, and was then leaking badly from the top of the tank, somewhere under the rear pickup bed. It was confusing that the Buick stopped yesterday, but the petrol tank appears to be nearly full?

Dave rushed straight back to the workshop, with only one short detour – 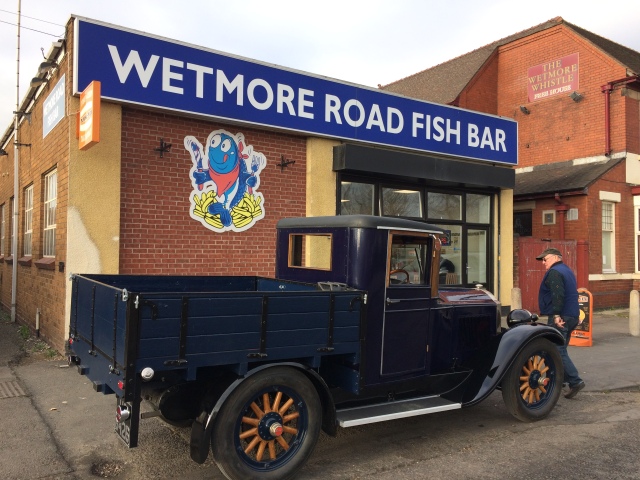 Now refreshed Martin, Ken & Dave removed the petrol tank, and found it was very dirty inside. Shit in the tank, they said, and it appears somebody already had. 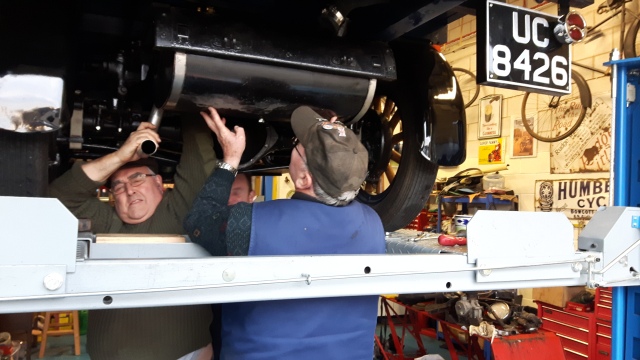 Ken did the Dirty Tank Dancing –

We got a lot of rust & muck out, including 2 pebbles, but it still needs a real good clean inside. We are considering cutting 2 holes in the top of the tank, so we can get in with a pressure washer.

There is a filter in the pipe by the fuel pump, so we will get that off and clean it out as well.. We are guessing a blocked pipe or filter caused the Buick to stop yesterday.

The sender unit on top of the tank was loose, and had no gasket, so that accounts for the leakage.

Good thing is that Rodney can now have the fuel gauge sender out of the tank, to get that working.

Petrol tank went back in, back out, in out shake it all about.

Mick the Welder cut 2 holes in the top of the tank, steam cleaned the inside, and made 2 new caps, screwed on, for the new holes. 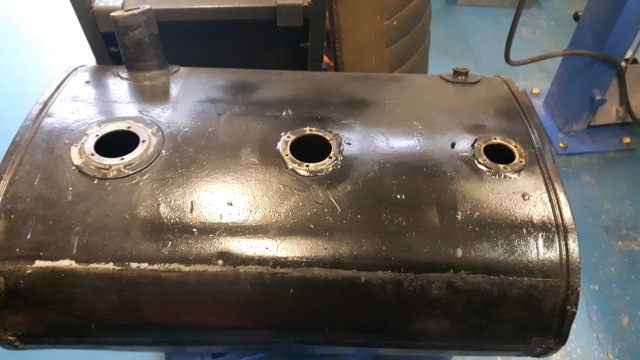 I then pressure washed the inside and Ken deep cleaned it with some special tank detergent and acid.

The tank was fitted back on the car, and we filtered the old petrol, and put about 40 litres in the tank. Next morning there was a smell of petrol and a small stain on the floor. It was not obvious at first, but there was a tiny pin hole in the bottom of the tank, and petrol was weeping out very slightly. Martin had a scratch at it, and when we took the paint off, it weeped a bit faster. All the cleaning and washing had disturbed the rusty surface inside. 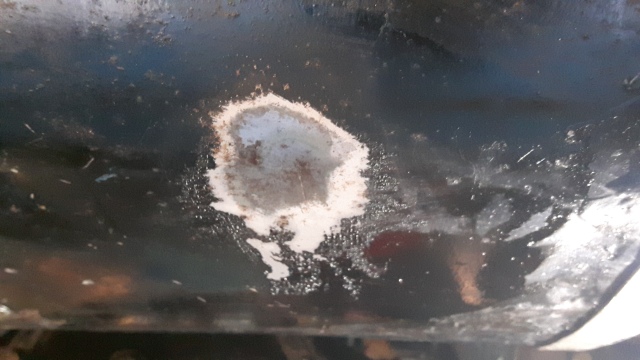 Drain the tank again and take it off the car; in, out, do the hokey cokey !

We considered getting the outside of the tank blasted to remove the paint, and maybe find more pin holes, but Ken & Dave decided to fill the hole with metal putty, and they have done a great job. It has been standing with petrol in the tank for 24 hours, with no leaks so far.

Meanwhile Rodney and Martin have been trying to get the petrol gauge working. It works by a thin wire connecting a floating cork on an arm of the sender unit in the tank, which pulls and pushes the delicate gauge mechanically on the dashboard, to show the number of gallons left in the tank. It looks like a very fiddly and difficult job to get it reading right. 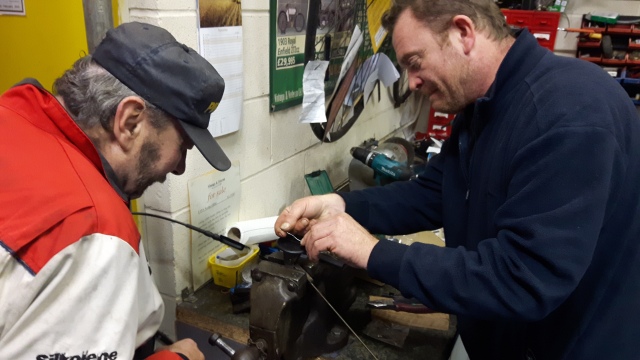 Onward and upward, and hopefully forwards as well.

Martin & Rodney got the petrol gauge working, and the tank back on the Buick last Friday, but we ran out of time to start the engine.

We went in today to start her up and check for petrol leaks, and leaks from the oil pressure pipe.

No petrol leaks, but we had oil coming from the back of the oil pressure gauge in the dashboard. The copper pipe was loose in the compression nut on the back, and we needed to flare the end of the pipe so the nut stayed in place and sealed. 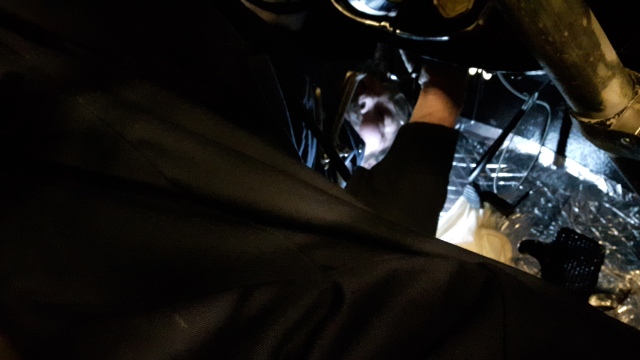 Rodney under the dashboard

No one locally had a brake pipe flaring tool we could borrow, so Rodney rang his friend Liaz  in Derby. Liaz has a full motor sports workshop and did the job in no time at all.

Back to Burton and Rodney upside down under the dash again, and the leak was fixed.

Then the ammeter wasn’t working. It showed a discharge, but not a charge when the engine was running. Rodney traced the fault to the regulator or generator. He will ring Pete Sparks for a consultation, and decide what to do. 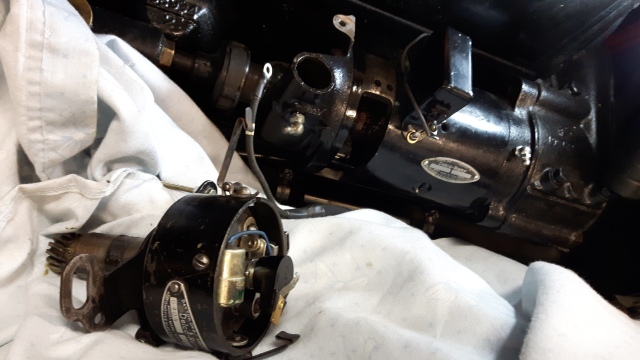 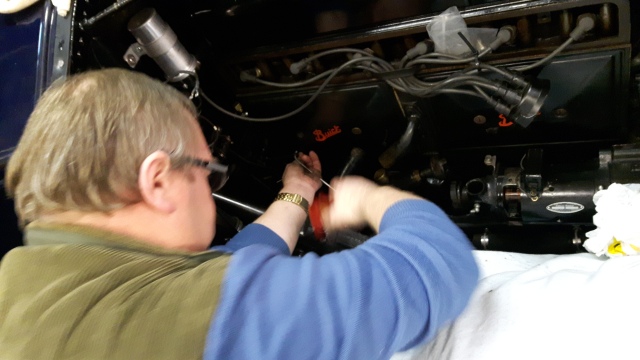 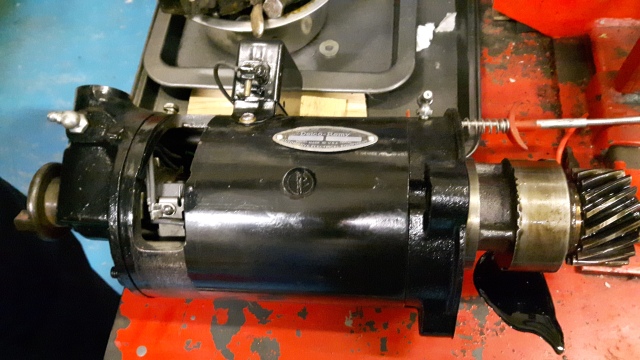 And………..left hand bonnet side is jamming at the top, and won’t lift up, so that needs a bit of adjustment.