Things are starting to happen again –

We now have 2 radiator caps, we have the bolts and springs for the back brakes, and my Buick has a rebuilt generator, and a rebuilt starter motor.

Me & Rodney collected the reconditioned generator last month. It has been rewound, changed to electronic regulator, and converted to 12 volts.

And Rodney has just delivered a shiny rebuilt starter motor and a dismantled distributor.

The cams on the points drive in the distributor are worn. I am going to show it to Magic Brian to see if he can make a new one.

We now have 2 radiator caps. I put a wanted notice on a Buick message group in the USA. My friend Colin in Surrey saw it and offered me a very nice radiator cap with a Boyce Motometer thermometer fitted.

It was quite expensive, but in very nice condition, and anyway, where would you find another?

And then I found another-

“When I was at the Buick National meet a couple of weeks ago I saw a plain radiator cap in the parts area. The vendor was Jonathan, his phone number is 5xx-2xx-9xxx
Regards, David”

I rang Jonathon, a very nice man, and we agreed a very reasonable price. He shipped it to England without being paid. It arrived yesterday and it fits a treat. I have sent him the payment. Thanks David & Jon.

Jon’s cap on the radiator

Magic Brian finished the new bolts for the brakes this week, and they look great.

I think Brian was a bit disappointed when I told him they would be behind the wheel and under the wing (fender) and nobody will see them!

The new thermostat housing is nearly ready. Thanks Brian. It was a complicated machining job, but the result looks superb. 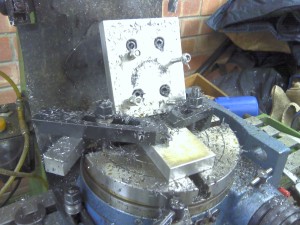 Brian made a special jig to hold it